UnCon is an event held each year at SugarCon solely for Sugar developers. This year we sent two of our software engineers to SugarCon 2015 because we take development seriously and we want to invest in our engineering team to ensure we keep delivering quality work to our customers.

By talking to Sugar developers our engineering team is able to learn from past experience what works and what doesn’t. Sugar’s engineers often run into issues and learn how to resolve them--and our engineering team can learn from that. During roundtables discussions, our engineers gave feedback to Sugar’s developers including improvements they would like to see in future releases, what resources are needed in a Sugar developer toolkit, and what they think would lead to improvements in the release process. “It was good to see that Sugar is continuously making very good strides towards development and bug fixes as quickly as possible,” said Tommy.

One of the coolest parts of UnCon is the Hackathon--in which any developer can build an integration or feature of Sugar on the spot. This year’s winner used Arduino to build a physical meter that queried Sugar for how many open tasks a user had and displayed it on the gauge.

All the developers in the room were supplied with food, beer and matching cat hats. But Ethan and Tommy also left UnCon with the toolset necessary to improve W-Systems' development processes. “Right now we have some manually replicated processes that take up a lot of time,” said Tommy. “The tools we’ve been given here should improve our cycles and eliminate monotonous tasks from our everyday lives.” These improvements will allow our engineers to deliver more value to our customers using fewer hours. 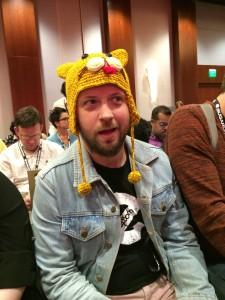