Let’s talk about prospecting. Research consistently shows that it takes way more than a couple of touch points to have a meaningful conversation with a prospect, but yet most sales reps are giving up after two or three call attempts. To complicate things, it’s getting harder and harder to get in touch with a prospect. Today, it takes an average of eight calls to reach a prospect--while ten years ago it only took around four calls.  Organizations using Sugar can take advantage of their CRM to improve their prospecting strategy--keep reading to learn more. 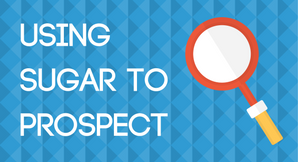 Use Sugar to Track Prospects

Prospects in Sugar are known as Targets. These are people who you know very little about but have contact information for. The Targets module is where all prospect records are stored. Reps can associate Calls, Meetings, Notes, Emails, and Tasks with each Target record. Keeping prospects separate from Leads acts almost as a lead scoring tool. Prospects (Targets) are kept with marketing until they are qualified to be passed over to a sales rep for further conversation. Sales Reps can work with more qualified leads once they are converted to a Lead, while Sales Development and Marketing can work with the prospects in the Targets Module until they are ready for a more serious conversation.

Use Sugar to Send Email Campaigns to Prospects

The main reason Targets exist in Sugar is so they can be used in the Target Lists Module. Target Records are added to Target Lists to create segmentation lists of people. These Target Lists are then used to send email campaigns to those subsets of people. Using Sugar’s Campaigns module your sales reps can send targeted email campaigns to prospects. Emails can be counted as touch points and click-throughs can be used to determine when a prospect is interested and determine when to convert them.

Review Prospect History Before a Call

Keeping prospects in Sugar allows a sales rep to review the prospects history before making a call. Things such as how many times they’ve been called, what reps they’ve been contacted by before, and any notes about the Account or previous Calls. This allows for a more meaningful conversation. If prospects aren’t kept in CRM it’s often hard for the sales rep to remember information about the prospect or remember that they spoke to them previously.

Probably the largest benefit from using Sugar to track and reach out to prospects is that the number of follow-ups completed by a rep is likely to increase. By creating Task records for new prospects and teaching reps to create a new Task after every call, you can make sure that prospects get followed up with regularly and with more frequency.

Prospecting is more than finding someone’s contact info and reaching out. By using Sugar to prospect, you should be able to better identify the hottest prospects, to increase the number of touch points with a prospect, and to better nurture the prospects so they convert more quickly. To see more SugarCRM best practices, comment below and let us know you’d like to sign up for our monthly SugarCRM newsletter.