SugarCon 2013 From a Developer Perspective

We just wrapped up SugarCon 2013 a few days ago and I find myself on the flight home eager to share the exciting stuff SugarCRM has in store for us developers. There is a lot.

While we were expecting to have to wait for SugarCRM 7, SugarCRM surprised us by delivering new developer libraries in the just released 6.7 update.  We have a brand spanking new REST Web Services API (v10) and also a new Java Script UI framework in SugarCRM 6.7 nicknamed Sidecar.

First of all, I know what some of you might think: "oh, a new REST API version, probably just going to add a few more functions". Well, no, the new API is a complete overhaul over the older v4.1; in fact, it's so many steps forward from the current API that Sugar decided to version it as SugarCRM REST API v10... v10 is a beast (in a good way). You will get complete streamlined control over your SugarCRM system, not only that, but it comes with extendable endpoints, so you can further build on that framework with your own functionality.

Oh yeah, and guess what? Remember that scarce documentation and that time you spent trying to figure out how to properly do a REST request? Well that's going to be a thing of the past now. There's new documentation and the SugarDev team has shown a commitment to keeping that updated through the API life cycle.   You can see this right now in the updated SugarCRM Developer Guide.

Sidecar is the star of Sugar7 and as promised, we get a preview 6.7 so we can start playing with it sooner rather than later.  Sugar 6.7 has an updated forecasting module that uses this javascript library and we can see clearly the UI enhancements made possible.  Inline editing is a welcome enhancement and it has been delivered in style!

What are we Still Waiting for?

SugarCRM 7 of course! But not for long, they are delivering live preview environments in the May / June time frame. This newest version of SugarCRM comes with a hyper modern HTML5 and Javascript based UI.  It is built on the latest BackBone, Bootstrap & Handlebars frameworks. Do they sound familiar? Well they should, they've recently become industry standards and if I were you, I'd start checking them out.

SugarCRM 7 departs from the old way of going about rendering pages through PHP with Smarty or XTemplate. Instead it focuses on building the UI frontend on the clientside atop the Sidecart javascript framework which then connects to the REST webservice.  Sugar7 delivers a significant speed boost and makes it much simpler for us developers to plug crazy awesome custom functionality on top of a high performance platform.

But you know what the best part about SugarCon was for me? Getting up on the Waldorf Astoria Grand Ballroom main stage with Chris Wettre to demo  our Quick Campaigns tool in the App Throwdown competition. That was an exhilarating experience for me, since, as all of you know, the best part about creating things is when people appreciate your work. 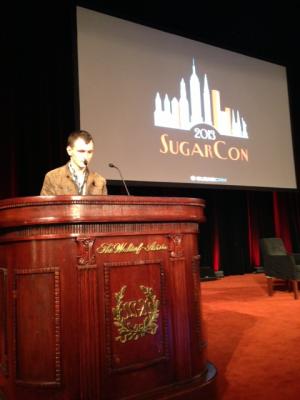 SugarCon 2013 is over but SugarCon 2014 is already in the planning stages so with that thought I'd like to invite you all to meet up at next year's SugarCon held in beautiful San Francisco. I'll be the guy without a suit permanently bonded to a Starbucks Venti.