A long time ago in a galaxy far, far away…. Take it away, John Williams and the London Symphony Orchestra!

The Star Wars franchise holds a special place in our hearts and, while some of the more recent movies and characters (I’m looking at you, Jar Jar) have a more divided fandom, it’s fairly safe to assume the old trilogy has made our childhood even better as we were rooting for Luke Skywalker to blow up the Death Star in Episode IV: A New Hope.

But, as we’re all grown up now, we often wonder: what if the Death Star never got destroyed? Could its weak point have been discovered and fixed by the time the Rebel Alliance struck? How would the Star Wars Universe look today? And, more importantly, the age-old question we’ll try to find an answer to in this blog post - could CRM have saved the Death Star?

Since the Galactic Empire’s Death Star is not exactly your run-of-the-mill business - they are using it to destroy planets, after all - an out-of-the-box CRM would not suffice. They would need a customizable solution that can be molded according to their planetary destruction needs, such as Sugar. Disclaimer: we do not condone the usage of Sugar to keep track of how many planets you’ve disintegrated.

With that being said, let’s investigate how the Death Star’s weakness could have been reported and potentially fixed using Cases in Sugar.

Open a Case, You Must

During a routine battle simulation, one of the Empire’s promising officers, Jude Edivon, noticed something odd: one of the Death Star’s thermal exhaust ports was left exposed. While still small in size, the exhaust ports lead directly to the station’s reactor core and a skilled enough pilot could fly through the Meridian Trenches and fire a few projectiles through it - like a set of proton torpedoes, for instance.

Since the Death Star has a crew of about 1,200,000 personnel and a width of 99.5 miles, it would have been difficult to find the station’s leader, Grand Moff Tarkin, in a timely fashion. Fortunately, the Death Star uses Sugar’s Cases module to report any problems, technical or otherwise, through various station sectors. Thus, Jude logged into Sugar, selected Cases from the Navigation Bar, and clicked the Create button to create a new case. 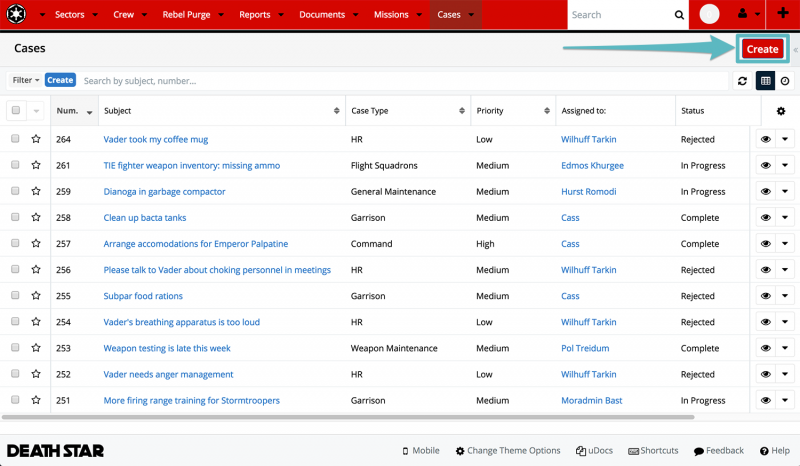 As this was a matter of utmost importance, Jude assigned the case to Grand Moff Tarkin and marked it as being High Priority. 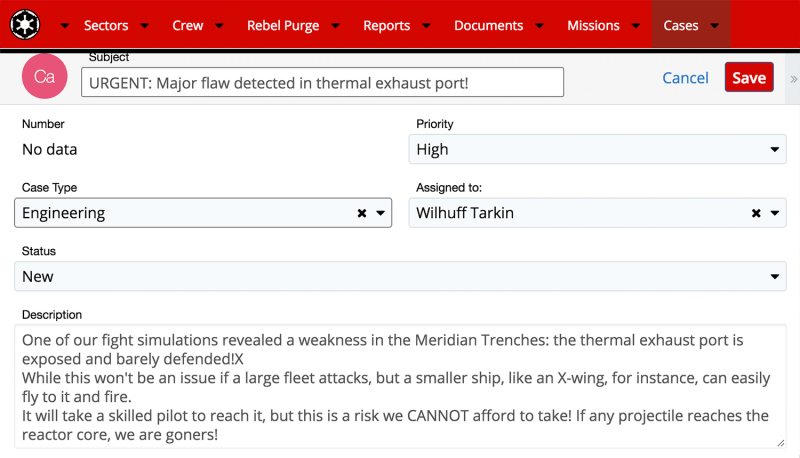 As Tarkin received the notification about Jude’s case, he decided to investigate. As he only wanted to track new issues and cases that were currently being worked on, his filter in the Cases module only displayed records with New and In Progress values for the Status field.

The Grand Moff noticed the new Engineering case assigned to him. This must’ve been urgent, as Jude Edivon bypassed the standard procedure of assigning technical cases to the engineers’ group user.

He took a quick glance at the record’s detail by pressing the Preview button. As he read its description, it became clear to him this request must go directly to Raith Sienar, one of the Death Star’s creators. Tarkin clicked the Edit button in the Preview Pane, then re-assigned the case to Raith.

Using Sugar’s Automated Processes, Raith would regularly receive emails about his open cases so that this critical case would not be forgotten!

Hopefully, we will see this scenario played out in the next remastered edition of Star Wars Episode IV: A New Hope!

Should you have any questions about Sugar that do not involve building a gargantuan space station to blow up planets, contact us today!

Note: the Galactic Empire’s Sugar instance had its interface updated with our Theme Customizer.

Sugar’s robust suite of customer experience solutions is changing the game for organizations everywhere. At the heart of Sugar's fully integrated platform is a simple and consistent experience — one that’s tailored to each user’s unique needs and ways of working across any device. It’s how two million users are already closing deals faster and creating customers for life, without spending countless hours digging for data.