Can something be on your bucket list without you ever knowing it was on your bucket list until you stumbled onto it? Frankly, I never knew about bucket lists until that movie came out a few years back. I actually didn’t even see it, but everyone was talking about bucket lists and so now I have a sort of unofficial bucket list. I guess I’ve always had an official bucket list, but it was more of a way to gather up good to great stories as I always like to spin a good yarn on porch sessions with friends.  In my ever quest to have great stories, my personality allows me to be open and try new things. I usually have a general plan of what I want to do or accomplish and then cast a wide net in my path to the end goal. I think that is why I like working with Sugar so much.  Its flexibility allows me to figure out the end goal and then morph my Sugar tools to get what I need it to do. I’m not handcuffed.

With this year’s SugarCon in New York, one of my end goals cropped up that tied both my love of a good story and one of my bucket list items. With the conference at the famous Waldorf - Astoria and the inclusion of a rooftop “Gala” as one of the events, I had the realization that I needed nicer clothes. In fact, the Waldorf probably realized that there might be a few of us non-stylish dorks out there for a technology conference and they sent out an email “suggesting“ that we look nice for their lobby. It was apparent I was in need of some new clothes. Being the very cheap person that I am (see, another reason I like Sugar!), I went to a local second hand clothing store that specialized in men’s business wear. I knew I was looking for something stellar for the Gala and the app throwdown for which I was to speak at. My goal was to get a nice sports coat with patches on the elbows for the speech (the professor look) and a jacket and ascot for the Gala (a fancy look). The place I went to had no ascots, nor did they have any jackets with patches that were remotely close to my size. However, as I was going over the section that contained jackets in my size, there it was. The most perfect white dinner jacket. It just oozed out class. The lady at the counter said all I needed was a bow tie and a pocket thingy for a pop of color and I would look like James Bond. 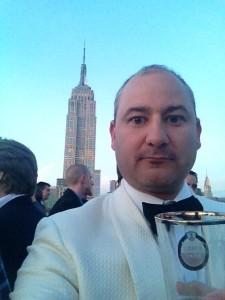 While I couldn’t find a jacket with patches for my speech, I did find a nice brown jacket. I completed my influential nerd look with this brown jacket and my red W-Systems t-shirt. The practice session was at the grand ballroom at the Waldorf. It was there that I understood I was about to cross off a bucket list item, even though that bucket list item didn’t exist until that day. I was a kid when TV consisted of three or four channels depending on the current cloud coverage. There wasn’t that much good stuff for us kids back then, but there was one show that was near and dear to my heart. The Muppet Show was always good for high quality laughs back then. It was edgy and fuzzy all at the same time. I think my roots in humor start with the Muppet Show. If Gonzo, Lew Zealand and Animal meshed into one lump of felted fabric, I would be the voice for it. Anyhow, either the Waldorf ripped off the Muppet Show for their grand ballroom or vice versa, but the grand ballroom is the Muppet Show theatre! In fact, one of the old men in the balcony is named “Waldorf”. And here I was about to play the Muppet Show theatre in front of hundreds of people while talking about the FedEx integration for SugarCRM. 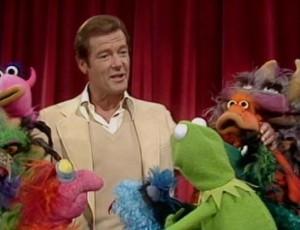 I have to say until I got there, I had no idea that being on that stage was such a big deal to me. I now will always feel like my inner muppet has accomplished something. Apparently, having a Roger Moore era James Bond white dinner jacket was something I needed to have as well. Who knew? I love how some things just work out. Which now leads us to this blog’s free answer to a user’s problem.

Q: If we have leads who are kind of kicking tires on our services, then ultimately decide they may not want to purchase right now, is there a way to have an option in their lead record to convert them back to a Target record? We don't want to Dead Delete them, but then they aren't going to move up to a Contact at this time. If we can move them back to a Target, we can keep emailing them and touch base with them in one way or another and maybe they will eventually come back as a Lead. Is that something that people normally don't do? I was looking to keep the lead bucket from getting too cluttered. Thanks.

Much like my previous story, you have an end goal and need to get there, but there can be many ways to get there. In this case, you want to separate leads so you can have different marketing efforts out of your campaigns module. We could create code that allows you to revert them to targets, but that would take a few hours of programming. The simpler solution is to have a way to make the leads filterable. There is a field in the leads called “Status”. This is a drop-down field that has different statuses like “New”, “In Process”, “Dead” and “Converted”.  All you need to do is go into your studio or drop down editor and fix this drop down to include a custom entry. I’ll use the word “Nurture”, but you can call it whatever you want like “Hibernate”, “Confused”, or “Abalone”. Assigning these types of leads to “Nurture”, now gives you a way to separate your leads with one click when you do reports and more importantly when you do target lists for your campaigns. Even better, you set up a campaign designed just for those types of leads. Remember, I’ll be answering an email in a blog for free. Keep those emails coming to me.

Let’s tie this all up now. We all have end goals for a bunch of things we would like to get done before the final end goal. Keeping an open mind on problem-solving will hopefully allow you to tick off many of those goals and get to a few you might have overlooked.