Webinar: How to Sync External Data with Sugar Register

Games Save the World

Last week I had the privilege of meeting with the CEO and CFO of a new startup company here in Austin. The company is called Games Save the World. Their product is a 48-piece card game called Monster Crab. Their business model, which was recently launched on Kickstarter.com, an online funding platform, is to develop a series of card and board games and later turn a select few into iPhone apps. The company’s product ideas are innovative, fun and have the creative insights of a child. Which makes perfect sense, since CEO Tobin Wine and his brother and CFO Griffin are both under the age of 9. 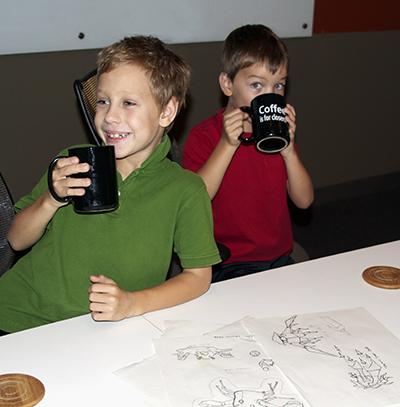 Tobin, age 8, and his brother Griffin, age 6, originally started the business to justify the need for their own iPhone. “

The idea for the business came when Tobin’s favorite game, Lego Universe, was discontinued. He wanted to start a business to create fun games that could exist as tangible objects and online.

Tobin and Griffin spent the end of their summer creating ideas for the first game Monster Crab, and have already begun brainstorming the second, which will be a board game called Ladder Escape. With the help of an illustrator, their dad Aaron Wine, and the support of the backers on Kickstarter.com, the boys hope to ship the first product this November.

The boys’ father, Aaron Wine, is a software engineer here at W-Systems. So naturally, my interview questions turned to inventory and customer management software. I wanted to know how Games Save the World planned to track all of its transactions, merchandise, and sales. I was surprised by the boys’ understanding of inventory and the role software would have in managing their business.

Tobin and Griffin plan to use SugarCRM's Community Edition to manage sales and customers. Aaron hopes to teach the boys how to use the software as the business progresses. The first step will be to import the data from Kickstarter.com into Sugar and tag them as the Kickstarter campaign. Having this data in Sugar will allow them to follow up with the backers by sending thank you emails from Sugar and also reach back out to them to pledge additional money for the next phase of the business.

Tobin and Griffin have already put up a website and will eventually add a contact form on the site to pull web leads directly into Sugar. The long-term goal is to sell the games in stores and online. They also plan to have merchandise for each game, such as T-shirts and will track all of their inventory in the CRM system.

Tobin and Griffin are actively promoting the business by word of mouth and with guerilla marketing tactics, such as chalk bombing the neighborhood. Their dedication and drive have proven effective because in just one week after its launch, Games Save the World is at 48% of its goal and still has 23 days left.

For more information about Games Save the World or SugarCRM, contact us here.