In this blog series, W-Systems engineers share experiences and stories related to projects, assignments and anything else they enjoyed working on. We love what we do and thought we’d share it with you. In this post, Keith Neuendorff tells us about the inspiration behind the Production Manager and how CRM can apply to almost any business.

Before I started working for W-Systems I was familiar with CRM as a sales force automation tool. Once I started writing customizations for Sugar, I began to see Sugar more as a flexible tool for managing all kinds of data.  It got me thinking about different problems Sugar could solve for businesses that wouldn’t typically consider using a CRM.

I worked in the local Austin film industry before I came to W-Systems. There I saw a great fit for Sugar with film production companies.  Producing a film requires a great deal of time and energy- from logistics and organizing all the people, to tracking equipment and locations for a project (art sometimes has a small part to play too).  I knew of a few small film production companies that have had ongoing problems with the organizational side of their projects and I thought Sugar could provide an easy and cost-effective solution for those issues. I created a set of custom modules in Module Builder to help coordinate the resources for projects.  The central module is "Film Project".  There are additional modules for "Cast", "Crew", "Props", "Equipment", "Media Storage", Locations", and "Shoot Days".  The Cast, Crew, Props, and Equipment were entered early on to describe known people and items that were available to the production company on an ongoing basis.  The Locations and Shoot Days would be created on a per-project basis.

A basic scenario for using the new modules would be that a producer wants to start organizing a project so they create a Film Project in Sugar and then add in the Cast and Crew that have been attached to the project.  Props, Equipment, and Media Storage would be added as the story and design are worked out.  Locations and Shoot Days would be added later as the locations are specified and then locked in. 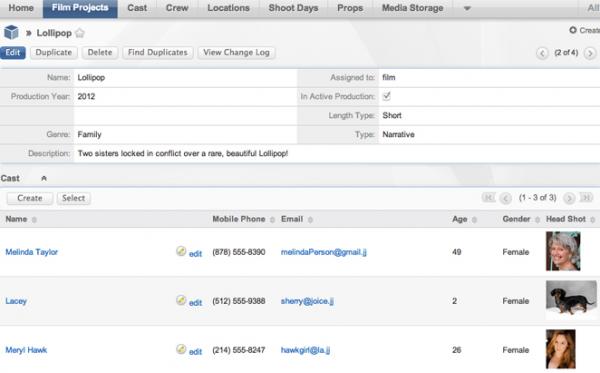 The relationships created between the modules allow a producer to see the right level of details for the full production or on a per module basis.  They can see all the resources needed for a project by looking at the detail view for the Film Project in addition to all the resources used for one particular shoot day.  They also have the ability to see what Shoot Days specific pieces of equipment will be needed.  The initial reactions from producers were very positive about the clarity that Sugar provides to their planning process.

The basic version of the Production Manager package was created completely in Studio.  It involved creating the new modules with the relevant fields and then adding in the relationships between them.  No coding was needed to deliver a fully functioning system that adds tons of value to the production process.